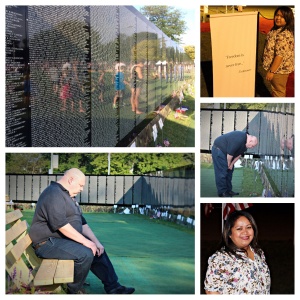 The half-size replica of the Washington, DC Vietnam Veterans Memorial called “The Moving Wall” has been touring the US for almost 30 years, and Berwyn, the city I live in, is honored to be the host sponsor for the State of Illinois for this year. Thank God for all the men and women in uniform who gave and are giving their lives for the sake of democracy.

But while my husband sat and prayed quietly, and while everybody were paying respect to the names of the soldiers listed on the wall with their stories about the Vietnam war, and how tears began to shed for some others who were locating names on the wall as they found who they were looking for, I can’t help but reflect on another perspective this wall brings to me personally and of which has something to do with marriage. Now, I somehow get the idea of how sacred marriage really is when one of the most respected Christian authors, John Piper, said, “… Let marriage be esteemed and valued as something terribly costly like the long, black marble Vietnam Memorial in Washington DC. In other words, when you think of marriage, let yourself be gripped by emotions of tremendous respect and sanctity.”